Trump Posts Humiliating Meme of Him on Mt. Rushmore and People Can’t Stop Laughing at How Pathetic He Is

Donald Trump honestly thinks he belongs on Mt. Rushmore. I just can’t over it. That big fat oaf thinks he should be etched in stone next to the faces of George Washington, Thomas Jefferson, Theodore Roosevelt and Abraham Lincoln. I, I…I just can’t get over it. The one-term, twice-impeached doofus just never stops making an absolute fool out of himself.

And this weekend he did it again, posting another meme showing himself on Mt. Rushmore.

Trump wanting to be on Rushmore isn’t a joke, either. In the summer of 2020 it was reported by The New York Times that Trump’s White House staff had contacted South Dakota Gov Kirsti Noem’s office about potentially adding the likeness of Donald Trump to the famous landmark; at the time, Trump denied the rumor from his soon-to-be-defunct, but now restored Twitter account.

This is Fake News by the failing @nytimes & bad ratings @CNN. Never suggested it although, based on all of the many things accomplished during the first 3 1/2 years, perhaps more than any other Presidency, sounds like a good idea to me! https://t.co/EHrA9yUsAw

In a more recent interview last year with right-wing podcaster Dan Bongino, he agreed with a suggestion that his likeness would be a part of the monument already were he a Democrat.

“If you would have run as a Democrat, you’d be on Mount Rushmore right now,” Bongino told Trump at the time, just three months after a deadly attack on the US Capitol by a mob of Trump’s supporters.

And now, he’s posted another meme to Truth Social showing him on Rushmore. 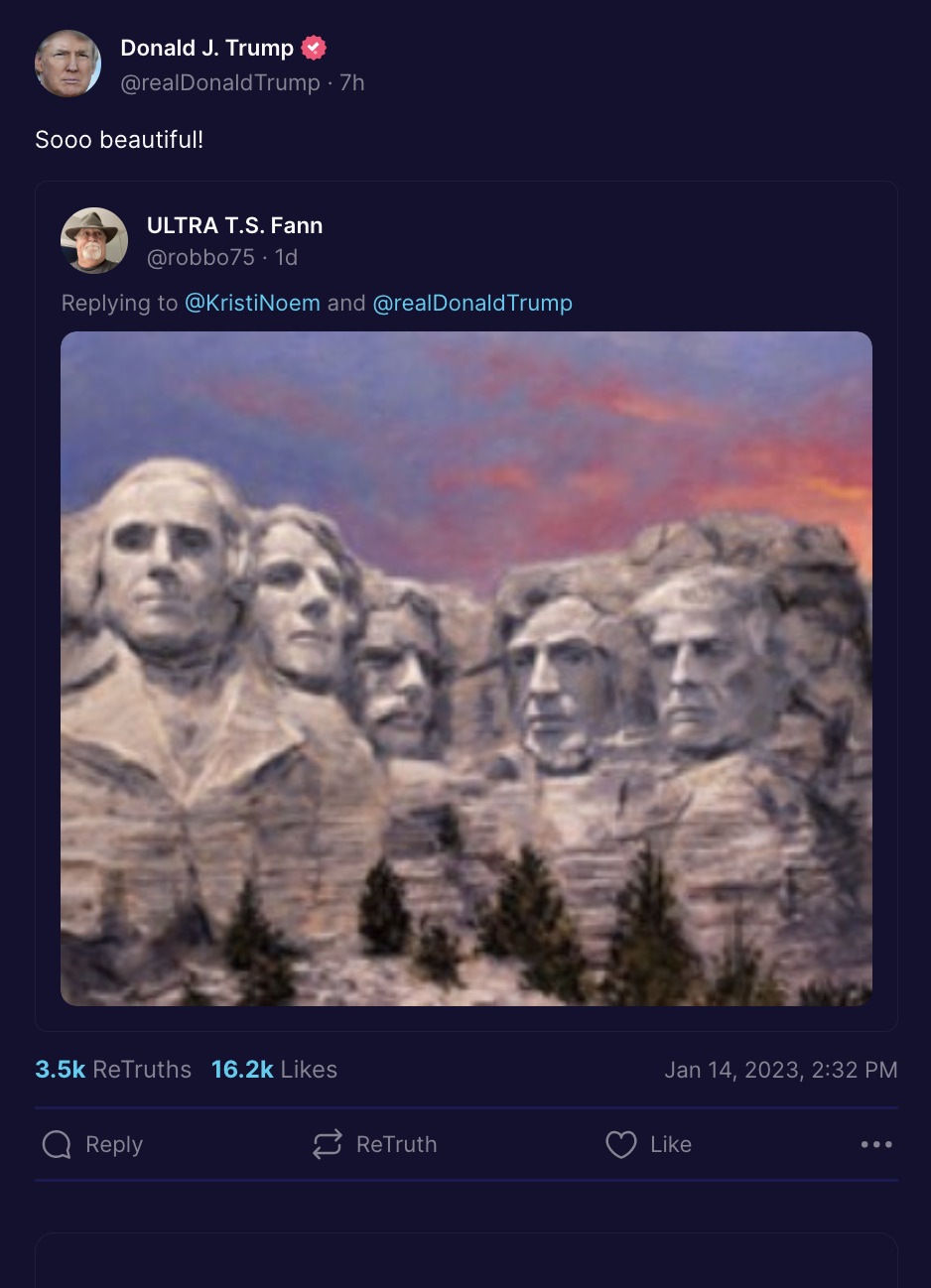 Lincoln looks appropriate annoyed by having to spend however long it takes for erosion to put him out his misery.

He even looks bad in this. The least they could have done is make him look good.

This one is so much more realistic. pic.twitter.com/qp9a12fLJM

Poor Trump's insatiable ego has run away with him again. He knows the walls are closing in, so here come the fantasies. https://t.co/k12WtKljcU