Is Donald Trump feeling a little left out? All the news the past two days has been about the passing of Queen Elizabeth, who has been Queen for as long as many of us have been alive. Prior to her death, the news was basically Trump 24/7. Of course the news was never good. No one wants to be in the news for possibly committing treason, but hey, it’s Trump. And to Trump bad publicity is better than no publicity at all.

Trump did make a statement when the news of the Queen passing first broke. Trump wrote, “Melania and I are deeply saddened to learn of the loss of Her Majesty Queen Elizabeth II. Together with our family and fellow Americans, we send our sincere condolences to the Royal Family and the people of the United Kingdom during this time of great sorrow and grief. Queen Elizabeth’s historic and remarkable reign left a tremendous legacy of peace and prosperity for Great Britain. Her leadership and enduring diplomacy secured and advanced alliances with the United States and countries around the world. However, she will always be remembered for her faithfulness to her country and her unwavering devotion to her fellow countrymen and women. Melania and I will always cherish our time together with the Queen, and never forget Her Majesty’s generous friendship, great wisdom, and wonderful sense of humor. What a grand and beautiful lady she was—there was nobody like her!”

He continued, “Our thoughts and prayers will remain with the great people of the United Kingdom as you honor her most meaningful life and exceptional service to the people. May God bless the Queen, may she reign forever in our hearts, and may God hold her and Prince Philip in abiding care.”

Trump also wrote about King Charles, again acting as if they were best buds. The only member of the royal family that Trump would have anything in common with is Prince Andrew, since they had a mutual close friend in Jeffrey Epstein. Writing about Charles, Trump said, “King Charles III, who I have gotten to know well, will be a Great and Wonderful King. He dearly loves the United Kingdom and all that it represents to the World. He will prove to be an inspiration to everyone. Queen Elizabeth has been, and will be from above, very proud of King Charles III.”

Then on Friday night, Trump just posted a bunch of photos, which no comments:

It’s funny he would post that last photo, since most of us remember it quite differently: 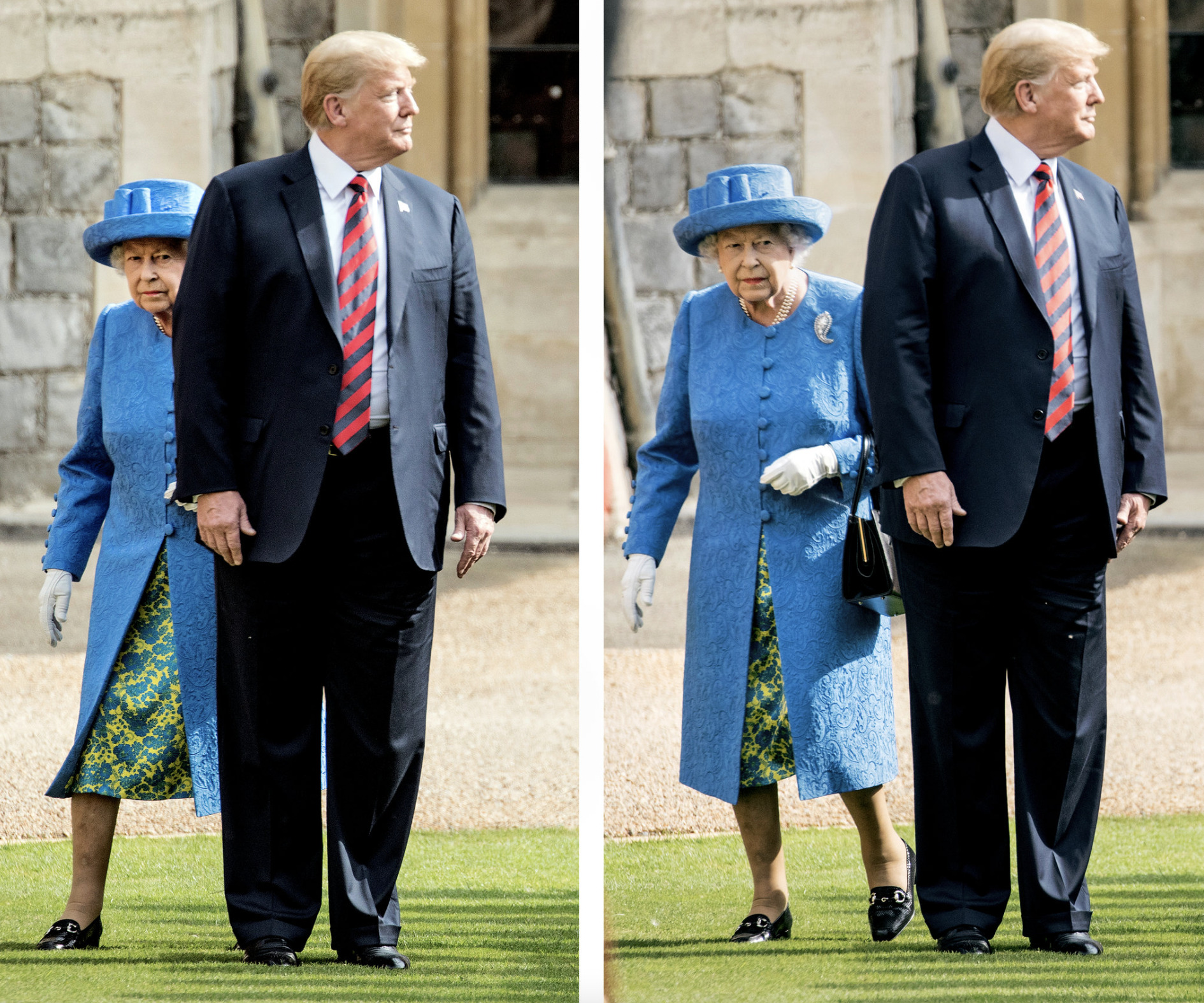 That incident was one of the many times Trump broke royal protocol. It’s considered very disrespectful to turn your back on the Queen, but Trump did just that when he strode ahead of Her Majesty while inspecting the Guard of Honour, at one point eclipsing her entirely. Ever the consummate professional, the Queen merely stepped to the side and kept to her pace.

And the thing is, Trump was briefed extensively on how to act when meeting the Queen. But Trump being Trump, obviously didn’t listen or care.

Trump also broke protocol when both him and Melania refused to bow or curtsey to the Queen. To be fair, this break in protocol is somewhat up for debate. While these days, the rules about bowing and curtseying when you meet a member of the royal family are less strictly observed: indeed, the family’s official website suggests that there are “no obligatory codes of behavior.” However, a small bow (a nod of the head would do) or curtsey has long been considered a sign of respect for the Queen. Both Donald and Melania opted out, choosing a handshake instead. Let’s just thank heavens that his grip didn’t appear too vice-like this time and it had been with other heads of state, cough cough Emanuel Macron.

Trump also broke a third rule. If there’s one golden rule for meeting the Queen, it’s not to be late. However, Trump didn’t seem to be aware of this, as he and Melania reportedly arrived around 15 minutes late to Windsor Castle, leaving the then-92-year-old monarch standing around in the summer heat. Eagle-eyed royal watchers noticed her checking her watch a number of times before Trump’s arrival.

And as if all that wasn’t enough, Trump’s presidential helicopter, Marine One, reportedly burned the grass upon landing at Buckingham Palace two times in the same day.

The source said that when Morrison, who also traveled to the UK for the D-Day anniversary, arrived in London, he “went straight to the palace to see the Queen, who led him out to the gardens and said: ‘Come and look at my lawn. It’s ruined.'”

The Times described the lawn outside Buckingham Palace as “the centerpiece of the Queen’s annual garden parties” and said the helicopter left both “scorch marks” and divots in the grass when it landed.

The outlet also said the Queen had taken measures to protect her lawns from helicopter damage, including denying a request from President Barack Obama to land six helicopters on the lawn of Windsor Castle in 2016.

But, if you asked Trump, Queen Elizabeth loved him more than any other president, and they were so close she considered adopting him. You can only imagine the stories Trump has concocted in his pea-sized brain.

In fact, Newsmax’s Grey Kelly said Queen Elizabeth had a better relationship with Trump than any other president. He offered no proof, but hey, who needs proof when it comes to Newsmax?

"This was the most genuine relationship with an American president that she had."

And I will just finish with this:

Although many presidents met with Queen Elizabeth, Barack Obama was the only President invited by the Queen to return after he left office. She reportedly regarded him as a pillar of integrity – a man of stability, decency, and rectitude. pic.twitter.com/ugJzqAnLSs