‘Go For It, B**ch!’: Rick Wilson Dares Trump to Sue Him For Running Lincoln Project Ad, ‘You are Weak, Impotent, and Flabby!’

The Lincoln Project’s Rick Wilson is in a fightin’ mood and not afraid of Donald Trump’s threats to sue the organization after it ran ads slamming him on Fox News.

Mediaite reports the former president threatened to sue the Lincoln Project and Fox News over a spate of ads (all local ad buys) that were targeted to run in areas where Trump would be likely to see them. The latest ad skewered Trump supporters, calling them “suckers” for supporting the former grifter-in-chief.

And hoo boy, is Trump spitting fire over that one! He’s so p*ssed off he couldn’t even get Paul Ryan’s name right. That’s some kind of angry, right there.

“The Paul Ryun (see?) run Fox only has high standards for ‘Trump’ ads, but not for anyone else,” Trump fumed in a Truth Social rampage. “The Perverts should not be allowed to ‘false advertise,’ Fox News should not allow it to happen. See you all Court!!!” 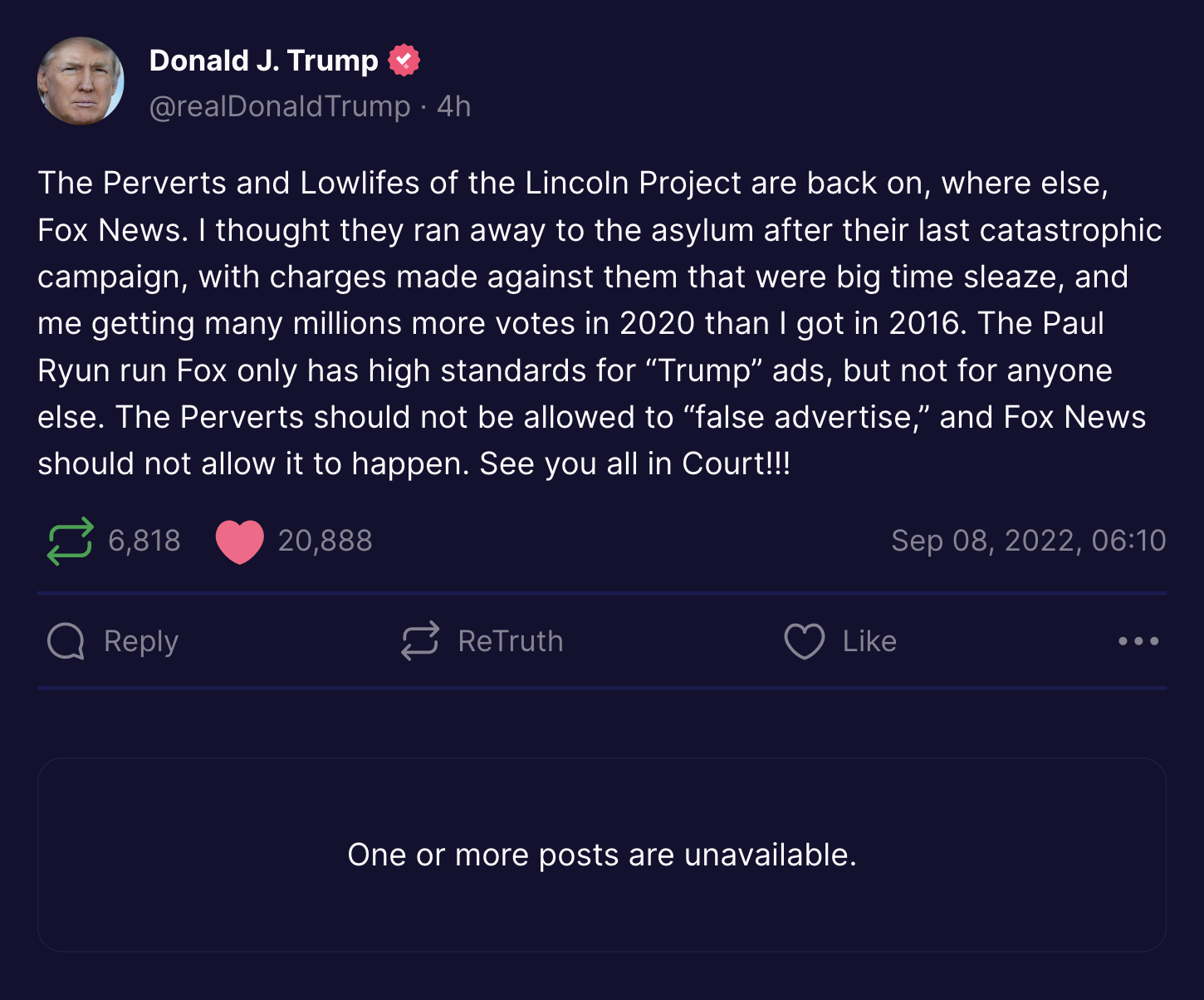 Perhaps Trump thought this might get the Lincoln Project to cool it, but it seems that didn’t happen. Wilson was particularly feisty and fired back at Trump’s post by daring him to parry with the organization’s legal team.

Wilson remembered the time when a lawyer representing Jared Kushner and Ivanka Trump previously threatened to sue the organization for putting up negative billboards about them around Times Square. Wilson mocked that threat as a “blustering sh*tshow,” and told Trump “You’re not going to sue anybody, Donald! You’re not going to do sh*t.”

And that’s not even the half of it, friends. Wilson also fired this salvo over the bow:

“You’re not going to do a goddamn thing. You are weak, you are impotent, you are flabby. You are sitting there in the bridal suite at Mar-a-Lago or in the bridal suite at Bedminster, grinding your gears, wondering why that the Lincoln Project, no matter how many times you try to kill us, keeps coming at you. You know why? We’re here in this fight for the long haul, because you are a threat to democracy,” he said. “You are a threat to America. You are a threat to the Republic. You are a threat to the Constitution. You are a thief of classified documents. You are a traitor to this country. You tried to overthrow the government and the system of our peaceful transition of power, and f*ck you. We’re here. You’re not. We will keep kicking your ass every single day. So if you really want to sue us, Donald, go for it. Throwdown! Let’s go. We can’t wait. You won’t do it because you are, in fact, as I said previously, completely impotent. Just ask Melania.”

Wilson couldn’t resist adding further salt to the wound by reminding him that Steve Bannon, his buddy, and former White House Chief Strategist is in another legal pickle.

Here’s Wilson, raring to go in the clip below, and right below that the Lincoln Project that roasts Trump “suckers.” Enjoy! I always love a good fight.

Donald Trump is "Truthing" that he's going to sue @ProjectLincoln.

I have words for him. pic.twitter.com/0Cnyu5xQ3W

And if you want to see the ad that drove Trump insane, here you go: